You have to listen carefully because of all the children in the background, but Elf is imitating a silly English banana on TV. Do you think his accent sounds authentic?

Bikinman's ship was about to go to the Pacific. He could not wait. When he got on he wondered who would help him on his jurny. Just then Ampinman came to the ship. Bikinman shoved off. Apinman didn't get on. Apinman flew up to the ship and landded on the ship. So Bikinman had to let him on.

Apinman worked hard on puting the sails up. Bikinman had to (he made his own job) clean the rats out of the ship. He also made the food. One day (Friday 2000) after lunch, handy dandy mouse yelled, "Danger! Danger! Be alert! Be alert! Octopus coming to room 56184! Shark coming to room 7968. Squid coming to room 126."

Graet! yelled Bikinman after a fist full of meat.

A portecson went arouned the ship. Then Wigly went towrd room 51684. When he boinged on the portekshon he bonged off. Sorry, said Wiggly. I just wanted to act tough.

But Bikinman interupted and said Get! Get! Get! Get get get! If you want to be tough, go to the Marines! So Wiggly did.

Then it happened to the shark and squid.

Bikinman thought it would be that Ampinman should look out with a spy-glass. He felt something was chaising them. Ampinman said they should ask the handy dandy mouse. Handy dandy mouse said, Pirets.

Bikinman grabed a cannonball. He shot. It made a hole in the barbery Pirets ship.( He also hit six of the men, 3 men where dead, 3 where ingered.) Finnily, after 2 minuts the ship (Pirets ship) sank. 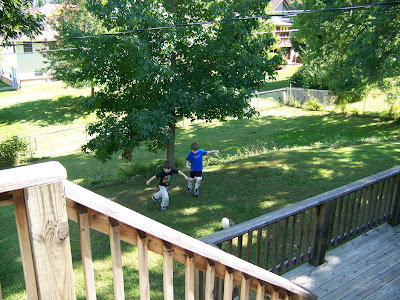 Hand soccer is an exciting game you can play outside with friends. To play, first put the ball in the middle. Next, run for the ball before the other players do. Try to score points. Once someone gets five points, he wins. Have a nice game!
Posted by Happy Elf Mom (Christine) at 7:25 AM No comments: